Recently, we sat down with 76ers two-way contract player Haywood Highsmith, who joined the Coat Check podcast to discuss his first professional season with the Blue Coats and Sixers, the whirlwind day that included his NBA debut, and more.

To listen to the podcast, click below, and also check out some excerpts from the conversation.

What are some of your goals for the offseason?

“This is definitely a big summer for me as far as developing, getting better. My goal is to become a better ball handler, a better playmaker coming off screens, [and] just keep being consistent with my shot. If I just keep working on it, I can definitely be one of the better shooters in the G League when it comes. You know, just showing that I got something to prove and just showing that I can bring something to the court for any team.”

What were your impressions of the Blue Coats’ new home—76ers Fieldhouse?

“It’s a beautiful facility—one of the better out of all the G League team facilities and arenas. When it got built, we were very excited going up in there to make it our home, make it home for Wilmington, make it home for people around the area and just give them a show every night they came out. Just enjoy the time in there. It was definitely a great arena. It had nice light. You know, the rims were pretty hard to me at first—I couldn’t make a shot—but I got used to it. I really liked the gym. I really liked everything about it. Everything was solid. It’s a great arena.”

Favorite moment with the Blue Coats this season?

“The game-winner [on Dec. 10 against Oklahoma City]. I feel like that was probably one of my favorite moments, personally. I wasn’t playing too well at the time, but I just came into that game with a lot of confidence and that game-winner was just a big step for me as far as [being] a player in the G League my first year.” 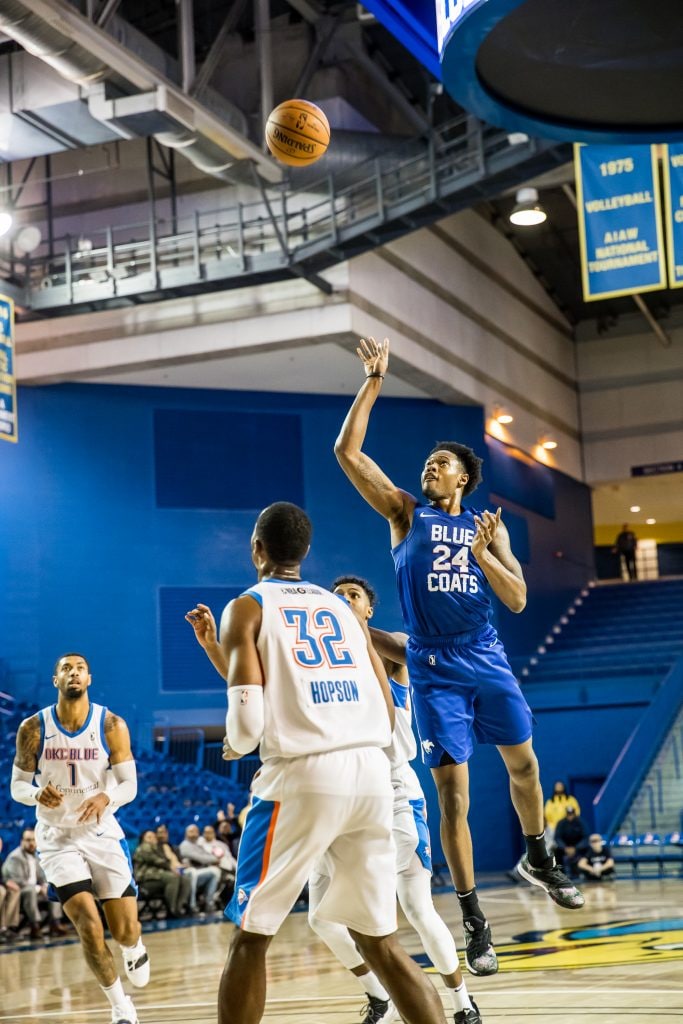 If you watch that game-winning shot again, you come over to the bench and say “one more stop,” so I thought that was pretty cool that you were thinking about defense.

“Yeah, everybody was celebrating and cheering, and I’m just thinking ‘we’ve got to get one more stop and then we can celebrate.’ [There] was some time left on the clock, so I wasn’t really too excited because you never know with this league. You hit one clutch shot, the other team hits another clutch shot…overtime. You never know, so I [couldn’t] get too excited, but that was definitely a great moment for me.”

With all of these experiences in mind—both Blue Coats and Sixers, everything that’s happened this year—what did you learn about yourself on and off the court?

“Let’s start with off the court. What’d I learn about myself off the court? I mean, I learned that I can be myself just anywhere. You never know what to expect going from playing college basketball to [being a] professional. Some people change, some people act different towards people. But I felt like I stayed the same. I stayed with my family, stayed with the same friends I had. I still talk to the same people I talked to in college. I just felt like I just stayed the same and I didn’t change. I didn’t change as far as just being the person I am, being the humble person I am, being the kind person I am.

And then on the court, I have some edge to me. I didn’t know my defense was really this good. Like, I really can become a great defender. I learned that if I’m locked in, and I’m ready to guard, that I can probably defend anybody that I can put my mind to. Anybody, if I can put my mind to it, I feel like. That’s just the edge to have and I feel like I learned that about myself this year. And once I shoot the ball with confidence, I feel like I can become a great shooter. So it’s all about confidence, having that edge, and having that motivation to become the player that you can be—the best player that you can be.”

Highsmith appeared in the second-most games (46) of any Blue Coats player this season, starting all but four of those contests. He averaged 12.2 points, 6.8 rebounds, and 2.6 assists in 32.4 minutes per game while leading the Blue Coats in defensive rebounds (218) and steals (53).

The 6-7 wing out of Wheeling Jesuit saw action in five games for the Sixers, scoring nine points (4-10 fg) and grabbing five rebounds in 40 NBA minutes.