Blue Coats head coach Connor Johnson recently joined team broadcaster Matt Murphy on the Coat Check podcast and discussed recent Blue Coats Shake Milton, Marial Shayok, and Norvel Pelle, as well as the NBA’s bubble in Orlando and some of the successes from the 2019-20 Blue Coats season. Below are a few excerpts in our Q&A format.

Look for new episodes of Coat Check every two weeks on the 76ers Podcast Network.

Q: What has it been like for you and your staff in Delaware to watch Shake Milton achieve this period of NBA success?

A: We’re excited, as everybody else is. [We’re] proud. It’s just great to see him play at the level he does. We talk about the Clippers game that the Sixers played where he just takes over and puts up some monster numbers playing against some really high-caliber opponents. It’s good to see. We’ve had a lot of guys on our team that you can really root for, and Shake’s no exception to that. He came in — I think he started a little slow in our year and then by the end he was really someone that everyone was excited about. And to see it come to fruition at the NBA level is really cool. It points to what we’re trying to do here in the G League. He becomes a great poster child for our young program and what we’re trying to do. The Sixers have done a heck of a job keeping him on that right progression, working with the development coaches and Tyler Lashbrook on a day-in and day-out basis. I’m excited to see [the Orlando restart games]. I think he’s going to have a lot of responsibility on his shoulders, but I’m hoping he’s ready for it and going to play really well once they get going.

Q: Why should 76ers fans be excited about the way Shake fits into the current lineup in Philadelphia?

A: That’s a good question. I think his versatility is number one. Playing with guys like Ben [Simmons], Tobias [Harris], Al [Horford] and Joel [Embiid] — guys that are going to command a lot of attention — you need well-rounded players around them. Guys who can get them the ball in positions to score, but also guys that can score themselves. I see Shake and I think the role he’s fit in really well is as a complementary ball handler who can make plays off the dribble, make shots when he’s open, but also knows how to facilitate and get those guys and play through them. He has a nice balance of knowing how to play and doing a lot of things at a high level, which I think coexists really well with the tremendous talent [that] the Sixers have at the top end of their roster. 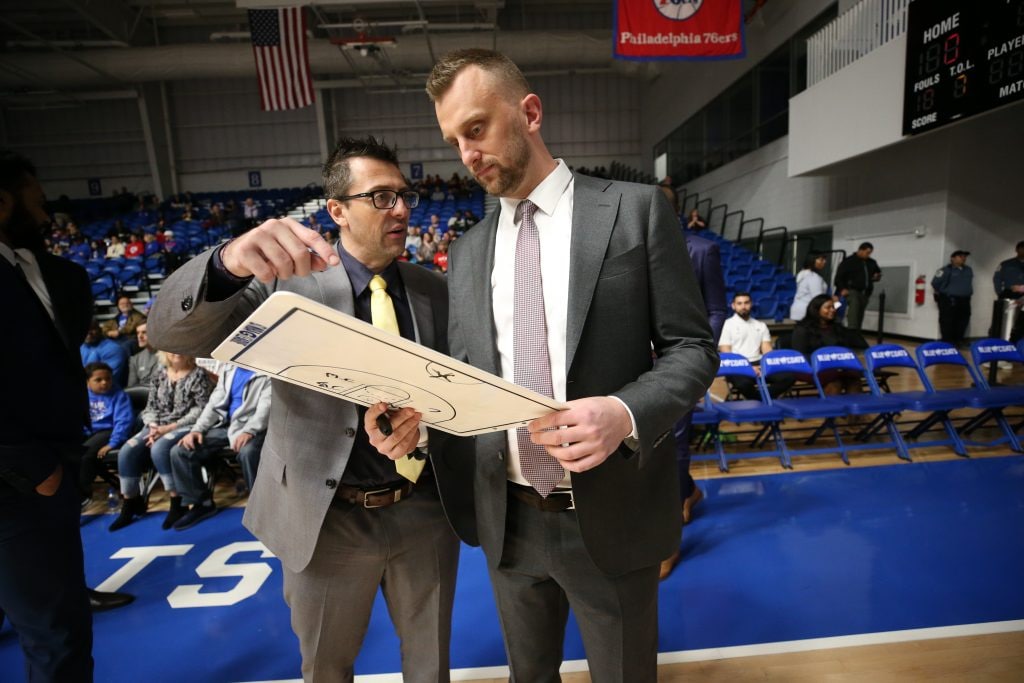 Norvel Pelle — you mentioned his personality. Playing without fans [in Orlando]…

He’ll have to bring the fire. No question. In an empty gym, Norvel might take it over.

Q: What were your main takeaways about the success of the Blue Coats season?

A: I thought we had a great year. Defensively, we really played well. Our guys bought in to being as physical and aggressive as we could. We were lucky. Our GM Matt Lilly gave us not only great players, but great guys who bought in to the system, bought in to the culture. Our whole hope is to develop these guys and help them achieve their next level, whether or not that’s with the Sixers or somewhere else. But then on top of that, we want to have team success. I think the number of games that we won, I think the way our defensive rating netted out at the end, those are goals that we set at the beginning of the year, and to have met most of them is a tribute to the players. [They are] talented players who worked hard and bought in to what we needed.