Blue Coats wing Haywood Highsmith recently joined the Coat Check podcast to discuss his video gaming experience at this month’s NBA 2K League ‘Three for All Showdown,’ the story behind his jersey number and more. Below are a few excerpts in our Q&A format, which we will publish one week prior to each new episode, with a special preview featuring the upcoming guest at the very end.

The Coat Check podcast is available every other Thursday in both the ‘Delaware Blue Coats’ and ’76ers Podcast Network’ feeds on Apple Podcasts, Spotify and elsewhere.

Q: What stood out about playing against 76ers Gaming Club (GC) in the NBA 2K League ‘Three for All Showdown’ [on Xbox]?

A: They just knew how to play. They know the little things to do. At the end of the day, they were hitting some tough shots, but they just knew their player’s [shooting] release down pat. On 2K, there are different releases for each player. So every time they would get open, they would just knock down the shot because they knew their player’s release. You can tell they work on stuff like that every day–knowing your release, knowing how to play and move without the ball, knowing how to play on defense. It definitely showed me that there are a lot of [people] out here who do this for a living and they really are good at it.

Q: Uniform number change this year: 24 to 7. I know that you were number 7 with the Sixers [last year]–how did you end up with 7?

A: I remember when I was signing the two-way [contract], they told me I couldn’t wear 24 because it was retired as a Sixer (Bobby Jones). So they gave me some number options, I looked them over, and I guess 7 stuck out. I wore it in football when I was playing quarterback, so I always liked the number 7. But, also, when I picked the number 7, I was thinking in my head like ‘oh wow, I was wearing 24 with the Blue Coats and 7 with the Sixers,’ so it was like 24/7. I don’t even know how that came about, but it actually came out of nowhere and [it] worked. And then eventually I just switched to 7 all around. Lucky number 7 has always been one of those numbers I’ve always liked. I actually got a chain with the number 7 on it, for myself, so it was pretty nice. 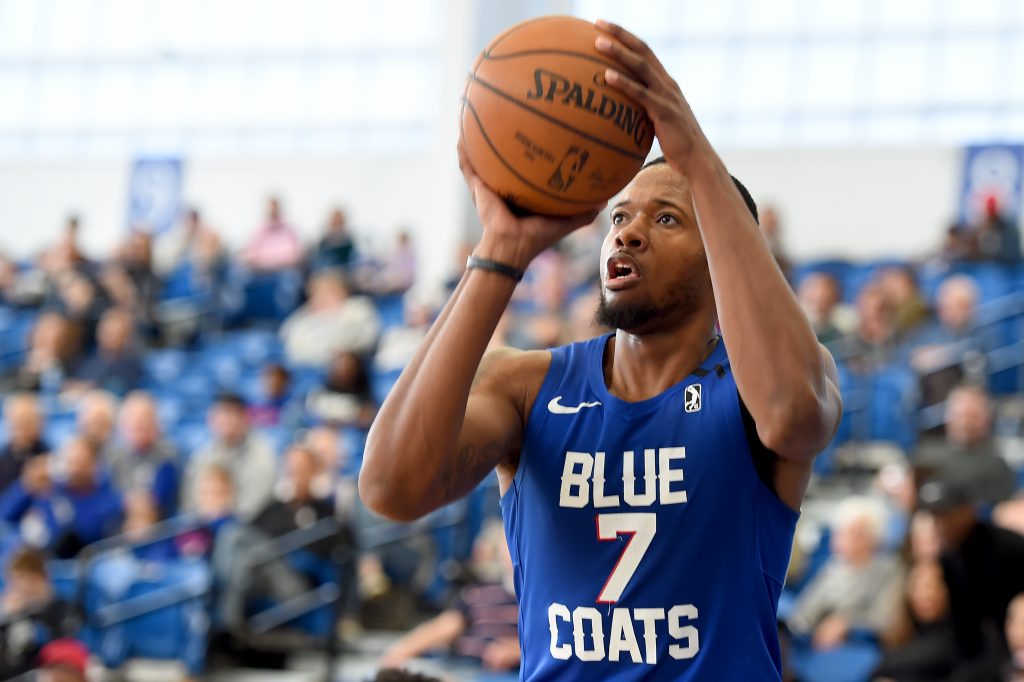 Q: What does your Twitter bio–“Dreams to reality”–mean to you?

A: I mean everybody growing up as an athlete, you’ve always got dreams of playing on those big stages in front of fans in packed-out arenas. I’ve always imagined myself–sometimes when I was in class as a young kid, I would imagine myself being in the NBA or maybe the NFL. Stuff like that…you think back to it, you know, [and] look at me now. That was a dream and I made it reality. It’s just crazy how the world works, it’s crazy how God works, but that was a blessing and I’m definitely grateful for that.

Q: Do you prefer a steal leading to a dunk or hitting a big three-pointer?

Q: What are you doing For the Love of Health during this time?

A: There is a beautiful park in Wilmington that’s not too far from our apartments. [Terry Harris and I] went out there a couple of times and ran. Got some miles in–three or four miles. It was pretty nice. There were some hills you have to climb up. You’ve got to go down some hills. I didn’t even know that park existed until Terry told me about it. It was actually a beautiful, nice run. It was fun. Stuff like that definitely makes a difference during this quarantine time when you can’t really get into a gym or get onto a treadmill to try to get your exercise in. Just being aware of your surroundings and trying to take advantage of whatever you can do outside.

Q: What were some of the biggest adjustments during the transition from player to coach?

A: I think the biggest adjustment from a player to a coach is the hours. As a player, you come in, get taped, go practice [and] go home. As a coach, we’re there probably three or four hours before the first guy even gets there. We’re talking and planning and thinking for at least three or four hours before they get there. And then we stay after for a while and talk about practice, and talk about about what we’re going to do for the next day and all that stuff. And so, for a player, it’s maybe a three, max four-hour day. For a coach, it’s easily seven or eight. And so that was the biggest kind of difference and adjustment for me. And I think for any player, that’s going to be the biggest thing.