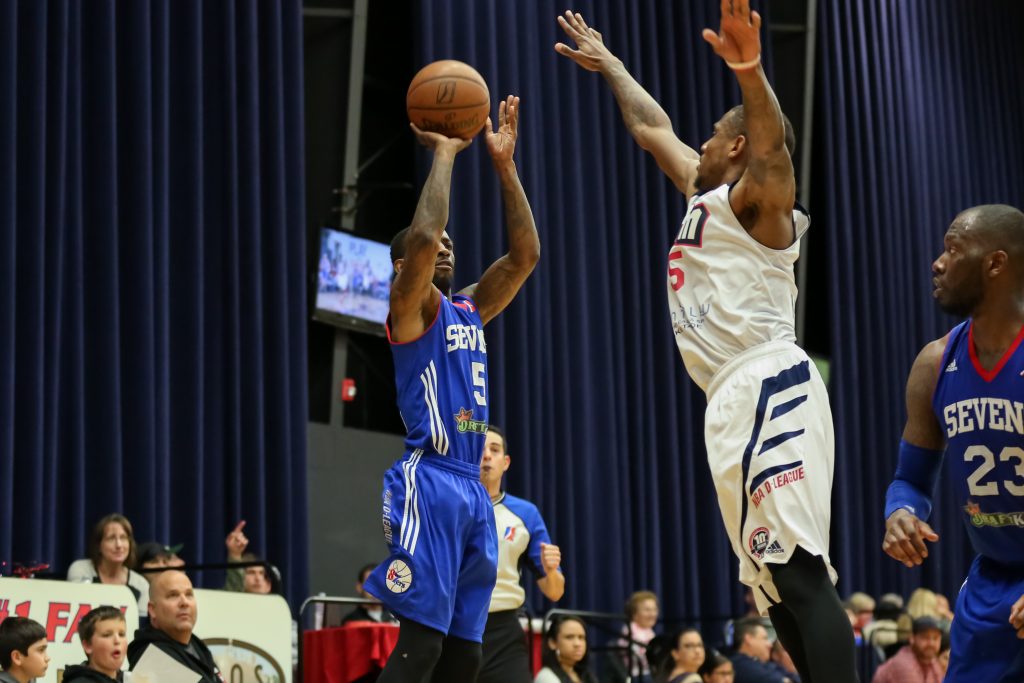 When we last saw Russ Smith in Delaware, he donned a blue jersey with white lettering that spelled out “Sevens”.

That’s right, the former Louisville Cardinal standout hasn’t been with the franchise since its days as the Delaware 87ers back in 2017.

Smith, over two separate stints with Delaware, enjoyed the most success of his early professional career, averaging 22 points per game over a 46 game span. This included a 65-point effort against the Maine Red Claws, still the NBA G League single-game record for points. He has his name etched in the Blue Coats record books as the franchise’s all-time leader in points per game (22.1) and assists per game (7.02), with a minimum of 40 games played with the team.

Following the 2016-17 season, Smith, unable to find a landing spot with an NBA team, took his talents overseas to China in the NBL (China’s Second-Tier Professional League). In a short spell with Louyang Zhonghe of China, Smith averaged a staggering 61 points per game, capped off by a career-high, 81-point performance against the Henan Golden Elephants.

This unimaginable scoring stretch led to Smith signing with the Fujian Sturgeons of the CBA (China’s First-Tier Professional League) for the 2017-18 season. Smith averaged 33.6 points, 6.9 rebounds, and 6.9 assists in 32 games for the Fujian Sturgeons in his first season with the team. Smith felt so dominant for the Sturgeons, that he went as far as deeming himself “the Allen Iverson of China.”

This dominant run, however, was not enough to earn Smith an NBA contract. In the summer following his first season in the CBA, Smith earned the chance to work out in free-agent camps with the Minnesota Timberwolves and Dallas Mavericks. Unfortunately for Smith, neither of these teams offered him a deal, and he re-signed with the Fujian Sturgeons for another season.

During the 2018-19 season, Smith only played three games with the Sturgeons, averaging 20.3 points, 7.0 assists, and 6.3 rebounds. He looked for a midseason change of scenery. While he stayed in China, Smith returned to the NBL with Guizhou Guwutang Tea, where he once again thrived. In 18 games with the team, he averaged 43.4 points, 4.8 assists, and 9.3 rebounds.

Once again, Smith failed to make a return to the NBA, so he attempted a new path for the 2019-2020 season. At the age of 28, Smith signed with Cariduros de Fajardo, a pro team in Puerto Rico. The Puerto Rican-based league begins its season in late February, meaning this past season was cut short due to concerns over the COVID-19 pandemic. In the three games Smith played, he led the team in scoring at 24.7 points per game.

He captioned a recent workout post with: “I’m very blessed to be playing at an extremely high level still working to achieve a goal… I play for legacy, experience, passion, and love. I feel great. I’m ready to play. #NBA – #CBA”.

Russ Smith stays ready for another shot at the NBA.