Imagine you’re in high school. Your job is to push a “shotgun” microphone into an NBA huddle, between the towering shoulders of men seemingly twice your size.

That’s how Dei Lynam got her start in the sports media world.

Lynam has worked more professional basketball games than many of our readers have watched casually on television.  Now in her fifth season as color commentator for the Delaware Blue Coats, Lynam is among the most familiar names on the Philadelphia basketball scene, thanks in large part to her decades-long run on the 76ers beat. Not shy to wear too many hats, she also hosts radio shows on 97.5 The Fanatic, and teaches at Chestnut Hill College.

That years-ago high school microphone gig – out west with Portland Trailblazers —was the catalyst.

“On occasion I almost got thrown out of a couple of [huddles], I tried to be as unnoticeable as possible and because I was small that actually could happen,” Lynam said. “All I had to do was get it close enough so that you know you’re picking up the audio but I had a couple hairy instances.”

Lynam ended up on the East coast in the late 90’s, right around the time her father, Jim Lynam, was in the midst of his tenure as head coach – and later general manager – of the Sixers. Through the spectacular years of Allen Iverson’s run in the City of Brotherly Love and beyond, Dei Lynam was on case, bridging fans to the action. 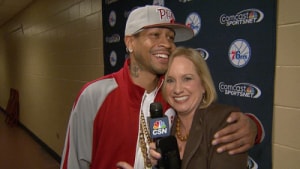 At the team’s media day in 2016, a conversation with then-76ers PR man Alex Yoh led to a new chapter. Yoh was transitioning to a front-office position with the NBA G League affiliate in Delaware. A few months later, Lynam made her debut as television analyst at Delaware’s home opener.

She’s called every home game since.

“Dei has not only elevated our broadcasts but also her vision has influenced so many other parts of our business as well,” Yoh said. “It is so valuable to have people on your team that are both great at what they do, and care deeply about the big picture.”

Speaking of the big picture, Lynam knows the broadcasts don’t become top tier overnight. She looks at the chemistry she’s built over four seasons with play-by-play announcer, Matt Murphy, as a crucial piece to the streams.

“The first year I did the Blue Coats games I had a lot of different play-by-play people in the same season,” Lynam said. “I do like that the last couple of years that Murph and I have done them because being a team takes time.”

Murphy recognizes the professional and unique perspective Lynam brings to a broadcast.

“Dei brings professionalism, immense knowledge of and passion for the game of basketball,” Murphy said. “First-hand accounts of Allen Iverson’s career are just one example of what you won’t find elsewhere on G League airwaves.”

Lynam takes all this experience and uses it to interact with fans directly, through that hosting gig on 97.5

“Hoops fans love talking shop with her. She has an incredibly valued perspective,” Yoh said. “You just feel it in the conversations.”

The conversations and ability to portray her point to others is what led to Lynam’s teaching career. She currently teaches classes at Chestnut Hill College and Rosemont College.

Lynam has taught sports journalism, sports marketing, and even sports gaming and media.

That path began when she went back and earned her master’s degree in 2018 and Chestnut Hill College offered her first teaching opportunity.

“[Chestnut Hill] wanted to expand their sports classes in the communications department,” Lynam said. “I had to create a rundown… the class was trying to teach people how much you have to be able to do.”

Lynam has preached the importance of being versatile to her students, and she’s followed her own advice more and more as her career has gone on. She also imparts her knowledge as a mentor for students enrolled in the Blue Coats Broadcast Academy, a program that was launched alongside Rowan University last year.

Lynam’s versatility is derivative of the influence of those she considers an inspiration. Doris Burke, one of the first full-time female analysts on a national NBA broadcast, is someone Lynam has admired and followed.

“Doris is somebody, as I got into my career I aspired [to be like],” Lynam said. “I had done play-by-play in the WNBA with the Mystics… making that jump to the color analyst, I really wanted to do that.”

Always up for her next new thing, and decades after working that first thing holding the shotgun microphone in Portland, Lynam remains that mainstay – to the delight of all basketball conversationalists.