Not only does the NBA G League serve as a development track for players, but coaches too. On the latest episode of Coat Check, Delaware Blue Coats broadcaster Matt Murphy and the team’s Ambassador of Basketball Joe Richmond chat with Jason Crafton, a former assistant for the team who is now the head coach of men’s basketball at the University of Maryland Eastern Shore.

Look out for new episodes of Coat Check on the 76ers Podcast Network.

Q: I know we’ll get to this in a little bit — about how your team (University of Maryland Eastern Shore) is not currently playing right now, but how are things?

A: Everything is great. I think it’s a tough time for everybody, for the teams that are playing and also the teams that are not playing…[COVID-19] is affecting everybody in different ways. But we’ve taken a lot of extra time to just continue to push our program forward by cultivating and strengthening our relationships with our players and doing some things in the community. I’m excited about our guys. They got a 3.2 team GPA this fall, so we were excited about that. We’re just finding creative ways to stay connected with them and keep pushing the program forward.

Q: You went from the Blue Coats to being a head coach again at the collegiate level. Reflecting on your first season, what was that transition like?

A: I tell you what, it was interesting. Not a lot of people know I tried to get this job over 10 years ago with the same Athletic Director, Keith Davidson, when I was an assistant coach at the Naval Academy. We stayed in touch, we became great friends and he became a mentor to me. So when it came around full circle and the opportunity presented itself, I was excited to just get back and be a head Division I coach. I really enjoyed my time with the Blue Coats last year, but the opportunity to be a head Division I coach at a place like Maryland Eastern Shore that I think has so much potential was exciting to me.

Last year was a hurricane of a year, just taking over a situation — I got the job late in the spring, so getting the staff hired, bringing in eight new recruits and then trying to infuse a tough brand of basketball — it was kind of a whirlwind. But our guys did a great job. We were top-10, in the first semester, in steals per game. We finished in the top three or four in the league in defense. So we set a stage for being an intense, defensive program. Now we just need to make some strides in terms of making some shots. We feel like we upgraded our roster in recruiting and added some shooters, so we’re excited about the future. 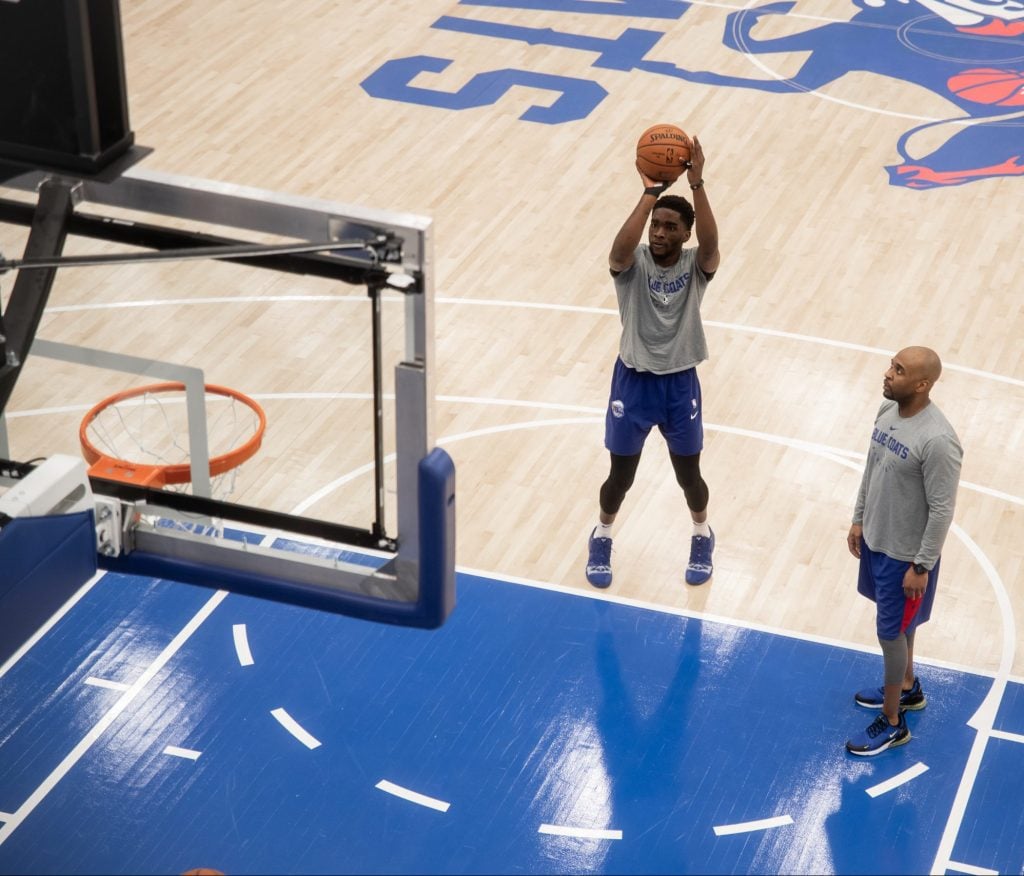 Q: It was Philadelphia 76er Shake Milton’s rookie year [2018-19] when you were on the Blue Coats staff…what has it been like for you to watch him step into a bigger role as an important piece for the Sixers?

A: Shake and bake! His journey is incredible. Every once in a while, I hit him up on social media and just tell him how proud I am of him. I remember in Sixers training camp, before the G League started, he had a back issue and couldn’t work out. I remember him just being on the side. He could only do ball-handling drills and some spot shooting. But he just watched. For all young players to just know: he could barely move for the first few weeks of training camp. [We saw him] just watch and put pieces together, and grasp the offense and grasp the defensive concepts. So that when it was time for him to start playing, he just hit the ground running. He’s a great kid. He’s got a great IQ. He can shoot the heck out of the basketball. He was a fun guy to have as part of our team. Great personality. He was early to practice, stayed late. I’m just so proud to see that kid go out there, take his bumps and also recover and have great games for the Sixers. He’s got a bright future.

Q: As someone who recently coached in the G League, how would you describe its current relationship and importance to NBA teams?

A: I think it’s really important. I love, with the Delaware Blue Coats, the way the organization is set up. I think it’s just got great people. In terms of a guy like [Blue Coats Ambassador of Basketball] Joe Richmond that comes around and brings the community [component]. In the NBA, you don’t always get that college setting. I felt like we had the unique balance of what college guys get in terms of being in the community and also that NBA player experience…

I think that the G League is really important based off how you use it. And I think the Sixers organization uses it as a legit developmental ground to not just make the players better as basketball players, but to help cultivate them as better people…

I don’t see a lot of G League programs do it the way that the Sixers one does. It’s a special experience. Sometimes when we talk about the G League as a whole, it’s tough. I isolate it to that experience. Even the way management allowed the G League coaches to be able to be part of the NBA staff meetings…So, our guys always got an opportunity to feel like they were part of an organization. And I don’t believe you get that in every G League organization. I think the Blue Coats do a tremendous job of player development — with [Blue Coats Head Coach] Connor Johnson, [Blue Coats GM] Matt Lilly, everybody in the organization is just around. They make themselves accessible. People were around and you got that sense of family. And that’s why I think it’s a legit culture there that’s going to continue to push forward.